We cherish our rural character

Our Plan embraces Stafford Hamlet’s uniqueness in a way that allows for some development/ employment lands where most viable while also protecting as much of our open spaces as possible, in accordance with residents’ wishes. This is accomplished by considering the Hamlet as two distinct districts instead of one:

This compromise solution to differing opinions on the future of the Hamlet is meant to be implemented as a whole rather than by considering the Borland area and the area north of the river/Halcyon neighborhood as separate, unrelated entities. 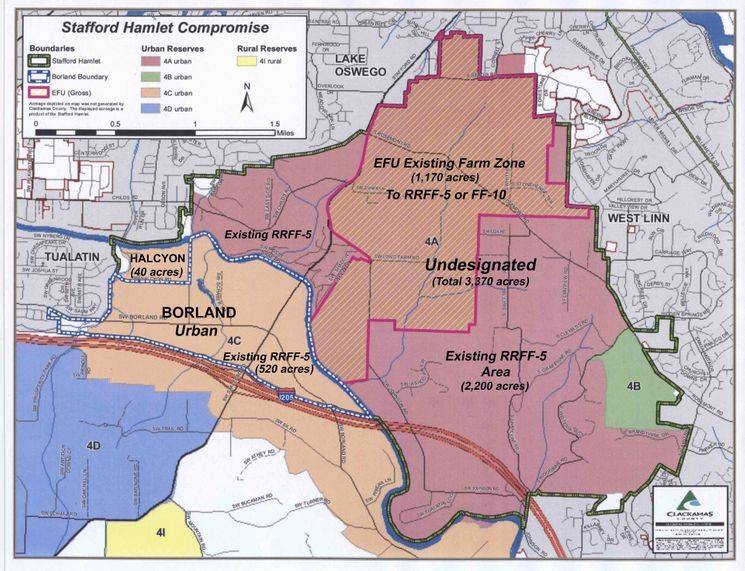 The Borland area south of the Tualatin River (excluding the Halcyon neighborhood) has a gross total of 520 acres, with a net developable area of 240 acres. As was cited in our Vision and Values statement, it is the most appropriate area of the Hamlet for denser development because of its flat terrain and proximity to I-205.

Eventual development of the Borland area will require provision of public services, such as sewer, water and roads. These services will be provided by 1) a willing city, which would annex the area and make it subject to that city’s Comprehensive Plan, or 2) a recognized governance entity.

We envision the Borland employment area as a Kruse-Way-type commercial development of class “A” office buildings that also includes restaurants and other retail business to support the people working there. This may include areas such as corporate campuses, medical facilities, and research and development. Development is expected to respect our neighbors, lower heights near schools, the Halcyon neighborhood, and the Tualatin River.

Developers should pay the costs of infrastructure and development. Such costs should not be the responsibility of residents of other areas of the Hamlet.

A traffic study and transportation plan will be needed to determine the transportation structure to accommodate planned development and to mitigate the impact development would have on the surrounding cities, the Stafford Hamlet and the region.

We expect any development to be a model of “green” urbanism, with consideration and enhancement of the natural features that make Borland special, including creek-side trails and Tualatin River wildlife.

Development must be done with careful consideration so as not to negatively impact Halcyon and adjacent neighborhoods.

North of the River & Halcyon Neighborhood

This area consists of 3,370 acres gross, made up of 2,200 acres of RRFF-5 (Rural Residential/Farm Forest) land and 1,170 gross acres of EFU (Exclusive Farm Use) land. The EFU total includes 385 acres that are riparian, public and private open spaces and rights of way.

This area is notable for its habitats for many native and sensitive plants and wildlife, which is enhanced by its connected open spaces, trails, and running waters, for its productive soils, and for its many heritage trees, all of which contribute to the health and enjoyment of the greater community.

Outside of the zoning allowances of RRFF-5 and FF-10, we do not support any employment land north of the river. We support up-zoning of Exclusive Farm Use (EFU) land, which currently allows only one home per 80 acres, as follows:

With this potential maximum number of new homes, no new infrastructure (sewer, water, roads, schools, public buildings and services) will be required, so no additional costs to residents will be incurred. New construction fees for private builders will be lower because the area is unincorporated.

As part of our commitment to preserving the Stafford Character, we also support exploring and promoting:

History of the Project

The Stafford Hamlet (“Hamlet”) advisory group was created in 2006. It is part of Clackamas County’s Hamlets and Villages program that allows residents of unincorporated areas to have a voice in their own destiny. It was born out of the idea that although change is inevitable, future generations will only enjoy our same quality of life if thoughtful, well-conceived change is implemented by current Hamlet residents.

The Hamlet consists of 3,930 acres, comprised of 2,760 acres of RRFF-5 (Rural Residential/Farm Forest) land and 1,170 acres of EFU (Exclusive Farm Use) land. This total includes 1,336 acres of riparian lands (waterways and wetlands) protected by State statutes, public and private open spaces, rights of way and land too steeply sloped to economically accommodate development and its necessary infrastructure.

Our 2009 “Vision and Values” statement, created after two years of public input and approved by a large majority of those who voted, details the “Stafford Character”—the special culture and nature of the area that the Hamlet community supports preserving as we consider any development in the Hamlet.

After community consensus that considered all potential scenarios, the following two alternatives were presented to the voters as those that best fit the Visions and Values:

A large majority of those who voted preferred the second option. (See chart, Appendix –) Combined with our desire to preserve the Stafford Character in ways consistent with our values (see Conclusion), this vote is a cornerstone for the vision plan we present here. This approach to the future of the Hamlet mirrored that of the Clackamas County Urban Reserve /Rural Reserve Policy Advisory Committee. In 2009, after a two-year process of evaluating land against strict criteria for Metro’s Urban Reserve creation, that committee recommended that the Stafford Hamlet be undesignated, except for the compromise stipulation that Borland be placed in urban reserves.

Understanding that our community impacts those around us, as theirs impacts us, we propose this as a regional solution that benefits Hamlet residents and the future generations who will live here, as well as residents of the surrounding cities, by providing a pastoral buffer zone their residents can (and do) enjoy but still allows them to keep their own individual character and identity. 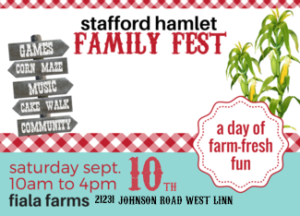 PLEASE CONSIDER VOLUNTEERING AT THE EVENT!  You can sign up at this link: Stafford Hamlet Family Fest Volunteer Sign-up!

Dial by your location